Use the Germanic hard "G" as in "game," not the French soft "G," as in "giraffe." The last syllable rhymes with "key." 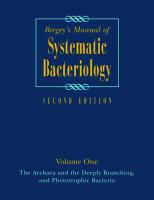 The first edition of Bergey's Manual of Determinative Bacteriology was initiated by action of the Society of American Bacteriologists (now called the American Society for Microbiology) by appointment of an Editorial Board consisting of David H. Bergey (Chairman), Francis C. Harrison, Robert S. Breed, Bernard W. Hammer and Frank M. Huntoon. This Board, under the auspices of the Society of American Bacteriologists who, then as now, published the Journal of Bacteriology as a service to science, brought the first edition of the Manual into print in 1923. The Board, with some changes in membership and Dr Bergey as Chairman, published a second edition of the Manual in 1925 and a third edition in 1930. (from About Bergey's Trust)